1. What are Live Ratings?

Live ratings are daily updates of the chess ratings of top players. Usually such ratings are updated within 1 minute of a game finishing, if it is played in a top tournament. Live Ratings are based on official ratings (FIDE ratings) which are updated once a month.

"2700" is considered the benchmark for the world’s elite chess players.

You can see the highest FIDE ratings of every 2700+ player at http://test.2700chess.com/records Also you can see the Top-20 players were in any month starting from June 1967 as well as the greatest historical players and their virtual ratings as calculated by Professor Arpad Elo.

We are pleased to inform you that we combined all the official ratings for top players from 1971 to the present day. We’ve also included earlier unofficial ratings that commenced in 1967. You can also see data for any player when s/he was in top-100 at any time since 1967. Every chart point has info that can be seen by placing your cursor on it. You can compare players' charts using different filters.

5. How can I find my favorite players' games?

You can find not only your favorite players' games, but probably your own games too! Just go to our database at 2700chess.com/games and start typing any players' name and Select the name you’re looking for from the auto-complete hints and press Search (or Enter).

Also you can select a famous player from drop-down menu at the right side of the White or Black Player Name. Another possible option is to do a quick search for the games from the main page.

6. What features are available when I’m reviewing a game?

You can see the player’s actual Age when the game was played.
The player’s national flag shows the federation he last represented (if s/he inactive or dead) or is currently representing, which may not be the flag s/he played under during the game.

You can also:
O analyze the game with a chess engine

O move pieces around from any position

O compare their charts and

Last but not least, the url for the game is unique. For instance 2700chess.com/game/capablanca-alekhine-r1-buenos-aires-1927-09-16 can tell you quickly who played where and when.

To keep up with current events, you can receive daily e-mails that advise you of changes in live ratings, world rankings and games links (if available) for your favorite players. These e-mails will provide the information you need about games played in all three main formats: classic, rapid and blitz.

To make this happen, go to Settings/Email Notifications and add your favored player/s from the drop down menu. You will receive regular e-mails updating information about these players, which will be like reading your favorite daily newspaper!

This feature is available for Premium Members.

You can play a game against our computer at 2700chess.com/play-computer using different levels whose strengths range from 1400 elo to 2800 elo. Also you can play a training game from any position of your favorite game in our chess database. But please note, we recommend using a desktop computer when playing vs Computer since it usually takes less time to process a position, especially at the higher levels.

9. What I can store in My Library?

After you’ve registered, you will have your own library on 2700chess where you can store your favorite games, favorite players, played games vs Computer, your analysis and uploaded games. However, to have unlimited access to your library you need to be a premium member.

No. If you click on a column (on the row below the tabs), it sorts players’ names that are already within the tab which is activated (Classic, Rapid or Blitz). For example, the default position when you open the site is with the Classic tab open. If the rapid column is clicked with the Classic tab open, it will show the rapid rating of the top classic players already displayed.

You can also sort players (in every format Classic, Rapid or Blitz) by Name, Country, ranking s/he has moved up or down, net rating points lost or gained, or by Age.

11. How can I find out exactly which players have been most recently updated?

You may see the progress in the following ways:
1) follow the players who have a live 2700+ rating in our daily pairings table
2) open the field linked to the magnifying glass icon on each players' line entry
3) check the Round Number in the list of Current Events
4) look at the games displayed in Chess Theatre.

12. I believe that a particular player has 2700+ in rapid, but I can't see his name on the list of best Rapid players generated by clicking on the Rapid tab. Why is that?

It may happen because the player's rapid rating is inactive, which means he did not play any rapid games during the last year.

Firstly, type his or her name in the Search field. It will search amongst the list of Top100 players (or amongst the Top50 Women’s players section). If this does not help, you can try to find him/her in the "All Fide Players" menu. Probably, the player is playing/played a chess tournament and his or her rating dropped out of Top100. If you are still sure your favorite player must be amongst the Top100/Women’s Top 50 then please email us.

14. Can you tell me about Chess Leagues?

Chess Leagues are team events inside a country. Sometimes they are played over many months with one round per month, and take place on a weekend, but sometimes it is played every day like a usual chess tournament. A player is not obligated to participate in the entire tournament, unlike typical non-team tournaments.

"i" symbol means an inactive rating. Please note players with inactive ratings (who did not play a single for the last year) are not sorted in ranking lists.

"unrat." means player does not have a rapid (blitz)rating yet, inactive or active.

16. What formula does FIDE use for calculating rapid and blitz ratings?

It's the same formula used for calculating standard ratings, but with K=20.

17. What is formula for calculating Live Ratings?

The formula which is used for every game in live ratings and official ratings are the same as FIDE’s official rating calculation formula. You can find more info at https://handbook.fide.com/

18. The game started but player 2 did not make a move. Is the game rated?

Whether unplayed games occur because of forfeiture or any other reason, they are not counted. Any game where both players have made at least one move will be rated. The result of the game is recorded as +:- or -:+.

The game was played but both players violated tournament policy. One example is where both players agreed to a draw prior to an official minimum move count for draw agreement. Instead of the game being recorded as 1/2:1/2, the result of the game is invalid, and thus 0:0 is recorded for tournament and for rating purposes.

21. I also have a FIDE rating, but can't see myself in the list of “All FIDE Players”. Why?

Probably you have not played recently and your rating became inactive. Please choose “Both” in the “Activity” field and press Enter.

If you have an idea how to improve 2700chess or if you found a mistake then please email us at info(at)2700chess.com

23. Why is/are the name(s) of one or more players in bold in the Finished Events list?

Bolding a player's name means they won or shared first place in the event or were a member of a winning team.

24. What is the "Online" tab placed alongside the Classic, Rapid and Blitz tabs on the main page?

The Online tab shows the list of the top players from thye FIDE Online Arena (FOA), the official gaming platform where you can gain your online rating. These ratings are updated at 2700chess.com/online every hour and stay active if a player plays a single game in 6 months. Also, you can acquire official FIDE-approved online titles which are published on FIDE's official website. You can start playing FOA games here https://new.arena.myfide.net/

25. Sometimes I see that the last move in a game is a weird move with the King moving to the center, like Kd4, Ke5, Ke5 or Kd5. Why is that?

It happens when the arbiter puts the King/s into the center after a game finishes. Sometimes this happens before a result is actually recorded and that's why we can see an odd King move as the last game move.

26. Do you plan to release an App for iOS and Android?

Not at the moment, but please note that since 2700chess.com has a responsive design, you can add the shortcut from any mobile browser directly onto your Home Screen. After doing that, you will get a pretty icon "2700" for quick access to our website.

27. What is the criterion for a player to be listed as a Junior?

28. Why are some games unrated in rated matches?

Once a player wins a match, then any further games played are unrated.

29. Why do some players have different K values (the development coefficient) for their rated games? How do I know which "K" I should use?

K = 40 for a player new to the rating list until they have completed events with at least 30 games.
K = 20 as long as a player's rating remains under 2400.
K = 10 once a player's published rating has reached 2400 and remains at that level subsequently, even if the rating drops below 2400.
K = 40 for all players until the end of the year of their 18th birthday, as long as their rating remains under 2300.

30. Why some games are rated differentially against the low rated players?

"For each game played against a rated player, determine the difference in rating between the player and their opponent. A difference in rating of more than 400 points shall be counted for rating purposes as though it were a difference of 400 points. In any tournament, a player may benefit from only one upgrade under this rule, for the game in which the rating difference is greatest."

Let us provide an example to help understand this FIDE rule:

For these four games we employ Regulation 8.3.1.

For the remaining three games we use table 8.1.2 at https://handbook.fide.com/chapter/B022022 and calculate the rating results according to this table. Please note, if a rating difference is 736 points or more, then the higher rated player cannot gain any rating points, but can lose 10 rating points for a loss, and lose 5 rating points for a draw.

Summing these outcomes we get:

That is we get a combined rating loss of 12.5 points in these four games against players B, C, D and E, each of whom is rated 400 rating points or more lower than Player A, the 2700 rated player.

An important quirk to note in this revised system is that the rating calculations in these four games are not finalized until round nine is completed. This is illustrated in our example above where the greatest rating difference between Player A and these four opponents, Players B, C, D and E, occurs in round 9 against Player E thereby changing some of the preliminary calculations for the earlier games against Players B, C and D.

The ratings gains and losses in the games played in the other five rounds of this tournament are calculated using the pre-existing standard rating formula.

Back to the main page 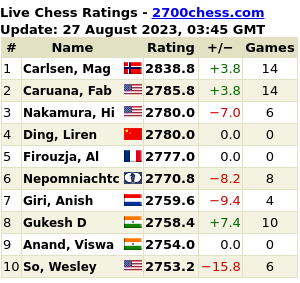 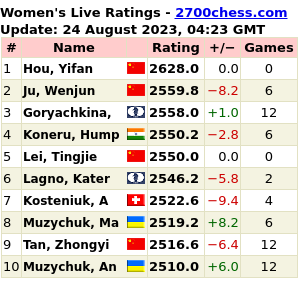 You can get the source code of either the 300px or the narrower 200px width for these banners by going to the LIVE GAMES section.